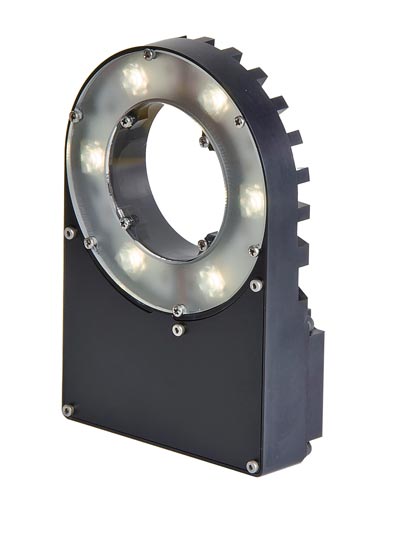 The Power over Ethernet (PoE) LED Ring Light is a patent pending product which simplifies your system power and cabling by providing camera power, LED light power and camera communication through one PoE cable. The PoE LED Ring Light can be used with any camera with built-in pulse width modulation (PWM) intensity control from the camera allowing the LED illumination to be controlled seamlessly through the camera user interface.

The PoE LED Ring Light has a flexible design to allow maximum usability and can be used with any PoE camera requiring 6 Watts or less power. For non-PoE applications, the PoE Ring Light can also be powered externally through a 6-pin connector. The intensity control is also flexible and can be controlled continuously or strobed using any TTL, Open Collector signal or manually fixed at one of fifteen set illumination levels using the external rotary switch.