By Mark Christenson and Keith Wetzel

The Cheetah C4080 and C2880 cameras support the recently introduced high speed On Semiconductor KAC12040 12MP and KAC-06040 (6MP) CMOS sensors. These image sensors can output full 12MP images at rates in excess of 70 FPS and 6MP images at rates up to 160 fps, without any blurring, because they offer snap-shot operation (Global Shutter mode). In addition, the image sensors have inherently high anti-blooming capability (>10,000:1) to suppress the effects of locally intense illumination without bleeding into the rest of the image. These features make the Cheetah camera ideal for high speed image capture in well controlled lighting applications, but outdoor scenes present another set of challenges, because imaging in daylight typically require cameras with higher intra-scenic dynamic range. IMPERX has innovated to address this challenge.

The intra-scenic dynamic range is the range of intensities that can be captured by the camera in a single image capture. This is typically limited by the inherent dynamic range of the sensor which is defined by the ratio of its full well pixel size to the noise of readout. For example, a sensor with 10,000 electrons full well capacity and 10 electrons readout noise will have a dynamic range of 1000:1. To express this in decibels, take 20 * Log (Dynamic Range) which equals 60 dB in this example. In this case, it is possible to record features in the image that range in intensity by 1000x at maximum. The Cheetah C4080 and C2880 image sensors have a full well capacity of 17,000 electrons and a readout noise of 25 electrons in Global Shutter (GS) [3.7 electrons in Rolling Shutter (RS)]. This means that the inherent dynamic range in the standard snap-shot mode (GS operation) is 680:1 which translates to 57dB of dynamic range. While this is suitable for some applications, the more demanding applications require the ability to see detail in the darkest regions of the image and the brightest regions simultaneously, hence a desire for wide dynamic range.

One way to increase dynamic range is to take several images at different exposures and then combine them to achieve a net higher dynamic range. This approach works well, if there is no motion in the scene, and there are extended periods of time available to process the image, but dynamic imaging applications involve motion of either the camera or the object being observed and taking multiple sequential exposures causes image blur. The Cheetah camera, however, has been optimized for high speed surveillance and tracking applications by employing a proprietary method to extend the sensors dynamic range using multiple-slope exposures within a single frame time eliminating motion blurring effects.

This method involves the evaluation of each individual pixel effectively setting a short exposure for bright pixels within the image and a long exposure for dark pixels within the image. The user has full control of the effective exposure time for the dark pixels (dark regions of the image) and the effective exposure time for the brightest pixels (bright regions of the image). Interestingly, the user need not know which pixels are bright or dark, the camera takes care of determining these details. The user simply defines the exposure period for dark regions of the image and then defines the portion of the exposure time for the brightest regions (pixels) in the image as some percentage of the overall exposure time. In this way, two different intensity slopes can be captured in one image capture. This method works very well and Figure 1 below illustrates the classic problem. In Figure 1, a highly reflective box in the foreground of the image is overexposed when the exposure is set to correctly expose the dimly lit color chart in the rear and wide dynamic range mode (WDR) is disabled. Figure 2 shows the same image with Cheetah camera wide dynamic range (WDR) mode enabled. Figure 3 and Figure 4 show results from monochrome captures.

Let’s take a look at an example to see how two image captures at different exposure times extends the dynamic range of the image. Suppose we are looking at an outside scene with standard illumination levels but, at the same time, we are trying to look inside a glass window of the building where we are watching a clock on the wall. The scene illumination could be such that our clock is poorly lit while outside the window, the lighting is quite intense. To see the clock on the wall, let’s suppose a 10mS exposure time is necessary to collect enough signal to overcome the image sensor noise and produce sufficient contrast. However, this ‘long’ exposure easily saturate pixels (bright pixels) looking outside the window where the intensity is far higher. In this case, all detail in the brightest areas of the image outside the window would be lost as the pixels in the bright areas quickly saturate. Alternatively, if we wanted to see good detail outside the window, let us suppose a 250 micro-second exposure time is necessary to produce a high contrast image without saturating the pixels. This very short exposure time does not allow enough time for sufficient signal to be collected inside the building and we are not able to see the clock on the wall. Hence the desire for wide dynamic range and the desire to capture a long and short exposure in one frame time.

Now, using the wide dynamic range capability of the Cheetah camera, we allocate a portion (say 30%) of the output range to dark pixels (dark regions of the image) and we set the integration period for these dark regions to 10mS. For the bright regions of the image, we decide an integration time of 250 micro­seconds is sufficient and dedicate the remaining 70% of the output range to these bright regions. In this way, two different intensity slopes are captured during the same frame time. Dark pixels integrate for the full integration time (10mS) and will have values between 0 and 30% of the image sensor output while bright pixels will integrate for the last 250 micro-seconds of the 10mS exposure and will have values that range from 30% to 100% of the image sensor output.

As an example, let’s see how this dual image capture within one frame time extends the dynamic range of the Cheetah C4080 camera. The Cheetah C4080 image sensor full well capacity is 17,000 electrons with 25 electron total noise floor. If the user sets the integration time to 10mS and dedicates 30% of the output to the dark regions of the image, signals less than 5000 (17000 x 30%) electrons are accurately measured and are linear with the exposure time. If the user then allocates the remaining 70% of the full well capacity to the brightest regions of the image with an integration time of 0.25mS, intensities up to 40x greater (the ratio of 10mS /0.25mS) than the dark regions can be captured. Since the user is allocating 70% of the output to these bright regions (as compared to 30% for the dark regions), this means that a signal of about 450,000 electrons (5000 electrons x 70% / 30% x 40) can now be measured accurately, providing an effective dynamic range of 450,000 / 25 (noise electrons) = 18,000:1, which is now 85dB instead of the non-XDR mode 56dB.

It is easy to see how varying the relative exposure periods allows an even higher expansion of the dynamic range of the system. In the graph below, the intensity slopes for normal (non-wide dynamic range mode) is plotted and compared to the intensity slopes in wide dynamic range mode for both dark and bright pixels assuming the exposure time for the bright pixels is 10% of the entire exposure period. One can see from the graph that bright pixel information is collected in the last 10% of the exposure time and captures a range of intensities with slopes greater than the slope of the ‘blue’ curve in the graph below, but less than the slope of the orange line. This configuration is said to have a single ‘knee’ point where the two different slopes meet. 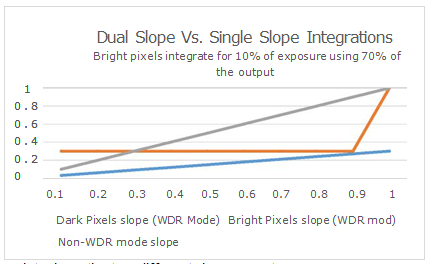 Comparison of intensity slopes in WDR and non-WDR operational modes 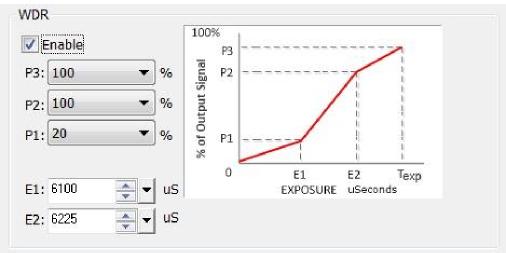